I have been able to experience a total of four World Floorball Championships in my career so far. Each WFC has its own magic and writes its own stories. And these stories, they are for life. These World Championship experiences shape and influence you for your future. Most of you already know the stories that happen on the field. For today, I would like to tell you a few stories off the field.

2014 in Gothenburg – Home away from home

The first World Floorball Championship is certainly something very special for every player. I arrived as a rookie without any idea of what to expect. In Gothenburg, we resided in a hotel a little outside the city. The drive to the venue was over an hour. The long bus rides, where no focus time was needed, were bridged with the app “Fun Run”. The entertaining game led to heated intra-team duels and shortened our long drive time. The distance to the venue also had its advantages: the hotel “belonged” to Team Switzerland. We used this fact for our own kind of recreation. Under the open sky a barrel was filled with water, which froze over night. The barrel was located directly in front of the indoor pool and we got used to jumping into the warmed pool for a short time after the ice bath – mostly without swimming trunks. A strange and probably unique feeling to swim naked in the hotel pool. This story reflects for me exactly the feeling I take away from the accommodation in Gothenburg: I was at home. The doors of our rooms were always open and we were among ourselves. Before going to bed, we always gathered in the fireplace room and got to know each other even better with sometimes very private stories. Despite the distance to our loved ones, we felt at home.

2016 in Riga – Only with accreditation

In Riga, the ice bath was located on the roof of the hotel complex. This time, a public sauna had to make way for the hotel pool, which was of course visited in appropriate clothing. The security forces around the stadium in Riga will clearly remain in my memory. Anyone who wanted to take a quick look at the game in progress on arrival at the stadium was immediately admonished and sent away. Residence permits were very strictly and bureaucratically enforced. Moreover, anyone who had left the dressing room without accreditation – be it for the warm-up or cool-down – had difficulty regaining entry to the players’ zone. One was denied entry even if one’s teammates (in identical attire) vouched for one. No accreditation on man – no admission! The Latvians were very strict about that. Without any problems we were granted entry to the “House of Switzerland”, which was held for the first time. The common relaxed end of the day after the games gave me and the team a lot of energy during the tournament. It is always a pleasure to experience how the Swiss community grows together to a big Swiss floorball family despite national club rivalry at a world championship. Through the «House of Switzerland», we had the opportunity to enjoy this family and the bonding feeling even during an ongoing World Floorball Championships and to draw a lot of energy from it.

The games at a world championship cannot be compared with the national championship. Big arenas, many spectators and a great atmosphere create a real floorball ambience. As paradoxical as it may sound, the bigger the “trappings”, the better I can focus on the game. This probably also has to do with the intensity and importance of the games. Most of the time, I hardly notice what’s happening off the field and in the stands. The exception is a game in Prague. During a power break in a group game, a competition was held between two fans to see who could drink a beer faster. For Team Switzerland, the father of one of the players was competing, which was then noticed on the bench. After the power break, the game continued in a focused manner, but after the game, the scene still provided cheerful conversation. For me, this scene is also emblematic of the atmosphere and ambience in Prague. For me, this was the world championship where the international floorball euphoria was most palpable and tangible.

The World Championship 2020 was special because of the Corona pandemic. The number of spectators was limited, the total euphoria (as in Prague) did not spill over to the same extent. Nevertheless, we could count on the great support of many fans in Helsinki. Despite the pandemic and restrictions on the return journey – thank you! It was fantastic and always a highlight for us to feel a rousing Swiss atmosphere in the stands. The pandemic also had an impact on our daily schedule. Due to the restrictions, we spent even more time together in our “team bubble” at the hotel. The old prison chapel (our hotel was a former prison) served us as a dining hall, but also as a lounge. When we weren’t in the arena, we spent most of our time in the prison chapel. Not only eating or discuss game theory, but also playing darts, table tennis, Playstation, card games or Settlers. These cozy moments of togetherness outside the floorball field will stay in my memory for a long time. What I will also remember is the temperature. In the training hall it was very cool – no wonder – outside there were sometimes temperatures up to minus 20 degrees Celsius. These temperatures also forced us to adjust our warm-up and cool-down. It was just too cold outside!

Now I am looking forward to more stories at the home World Championship in Zurich. But especially, of course, to the encounters and emotions on the field, because that’s what makes me love floorball. 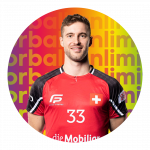 Luca has been an established member of the national team since 2013 and shares the role of captain with Tim Braillard. He moved to Sweden and will played for IK Sirius IBK in the last season. Luca is more or less our “foreign correspondent” for the WFC 2022 Blog.

LEND joins as Official Sponsor of the World Floorball Championships 2022

The schedule is ready: all tickets on sale now!