2022, the year of the home Word Floorball Championships, is actually here!

Then about a year later I had another memorable moment, albeit of a personal nature. The Word Floorball Championships project had really taken off in the summer half of 2019. We succeeded in convincing public decision-makers of our ambitious goals. The dimension that became possible as a result made us all dream. The certainty formed that everything was there to create something really big. At the time, I was not intended to be the project leader and wrote a job profile for this person accordingly. My new job profile, as I suggested to my superiors shortly afterwards. Fortunately, they saw it that way too. A job profile for my successor in the previous position was then posted instead.

Three months later we had the first Corona case in Switzerland and on 1 May 2020 I finally started the Word Floorball Championships adventure in a full-time position.

And now 2022 is actually here. And Corona is still with us. But I’m still optimistic. The Swiss fans are too, at least that’s what the ticket sales figures indicate. I don’t think it’s just optimism for the sake of optimism. Plans are constantly being thrown overboard, milestones postponed or adjusted. Can the draw take place in March as planned? Maybe not, two qualifying tournaments have already been postponed. Will there still be restrictions during the Word Floorball Championships? Almost certainly. The state of “trepidation” has meanwhile become quite penetrating in “daily business”, but so has the habit of adapting rapidly to new conditions. But hey, the street floorball project that got rolling with the 2022 Word Floorball Championships went through the roof in 2021, driven primarily by the pandemic. And doesn’t a lean period increase the anticipation of once again experiencing the tingling feeling when our national team enters the arena in front of 11,000 fans?

2022 will hold 1000 surprises in store. It would be unwise to ignore the fact that, in the worst case scenario, the Word Floorball Championships could be postponed one day before the start because of mutation Sigma (or Ypsilon or Psi?). It is fundamentally unwise to travel without humility. But the anticipation is stronger, I can see that in everyone: At swiss unihockey, at the volunteers, at the partners and at the Swiss floorball family. And we want to carry this joy a little further into Switzerland – and beyond – every day. Admittedly, “carrying it out” is more of a metaphor at the moment. When I look around my 6m2 home office room, which is three metres from my bed, the physical radius at least is quite sobering. But most of us probably know by now that many things also work quite well virtually. And so I am convinced that 2022 will be gigantic, despite and with Corona. Because we still have it in our hands. 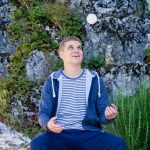 “We want to be the best Non-European team”