The year 2021 marks the birth of street floorball in Switzerland, the name of a new form of floorball. It is new because it takes place outdoors!

swiss unihockey is launching the Mobiliar Street Floorball Tour together with Mobiliar, the main sponsor of the WFC 2022. In the run-up to the WFC, the Mobiliar Street Floorball Tour will be visiting different Swiss cities and offering action and fun for everyone who can hold a floorball stick. The kickoff is planned for June 2021 in Winterthur. All information on the tournament and registration will follow soon and will be communicated via the swiss unihockey information channels. Stay tuned…

The motto “Reduced to the max!” makes it clear that street floorball should be as simple as possible. So, there are only a few basic rules and because there is no goalie, a bare minimum of equipment is needed. These are exactly the characteristics that make floorball such a great success. swiss unihockey has also developed an official version of the game for the tour, with a basic form of 3 against 3 players without a goalie.

Here are the official rules of the game (German). 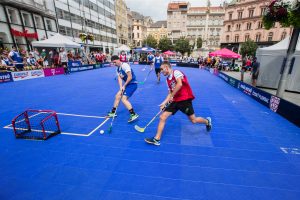 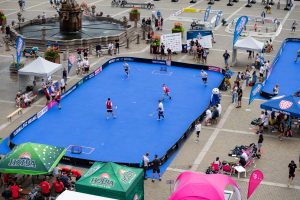